Q1. You have an application using a 100 GB MySQL database that you are migrating into AWS. What should you consider when deciding between whether to host the database on RDS for MySQL or Aurora?

Q2. Which database is a NoSQL database type that can quickly store and retrieve key-value pairs?

Q3. Your database is an RDS instance running SQL Server with Multi-AZ replication and you have several older .NET console utilities that perform database operations every 15 seconds. When the cluster has to switch the primary database server to the secondary AZ, the .NET utilities start to report connection failures to the database although other applications are able to access the database. How do you correct this problem?

Q4. What AWS services can help you automate your development pipeline for continuous integration and continuous deployment?

Q6. You have a large amount of files on your network-attached storage array that must be archived and maintained for a period of 10 years due to industry regulations. This data will be infrequently accessed but must be kept What is the best AWS service for storing this data?

Q9. How do you architect a solution for an SQL Server database to be replicated across AWS regions in an active-active architecture?

Q10. What does it cost to launch an EC2 instance from the AWS Marketplace?

Q11. When using an ECS cluster with EC2 instances, what maintenance tasks should you perform on the EC2s?

Q12. What in-memory caching server is not supported by ElastiCache?

Q13. Which AWS service can be used to help generate the documentation required by various compliance standards, such as Payment Card Industry Data Security Standard (PCI DSS) Level 1 for the handling of credit card data?

Q14. When using AWS for research and development ahead of a planned migration, how do you prevent unexpected increases or spikes in the billing?

Q15. You are creating a DynamoDB table to store all movies that have been released since 1938. Your application will allow users to search by movie title and see the details of that film. Given the sample below showing the movie data that you will be importing, what is the best set of keys to apply to this table?

Q16. What data store provides a simple and quick way of storing basic user attributes in an object-based format?

Q17. You need a schemaless database. Which Amazon database service provides that solution?

Q18. Which communication channel does SNS not support natively?

Q19. When designing a serverless web application using Lambda, what key concept must you factor into your design?

Q22. You are hosting an application configured to stream media to its clients on TCP ports 3380-3384, 3386-3388, and 3390. The Inbound tab below shows three incoming security group policies attached to this instance. Which policy should you use? 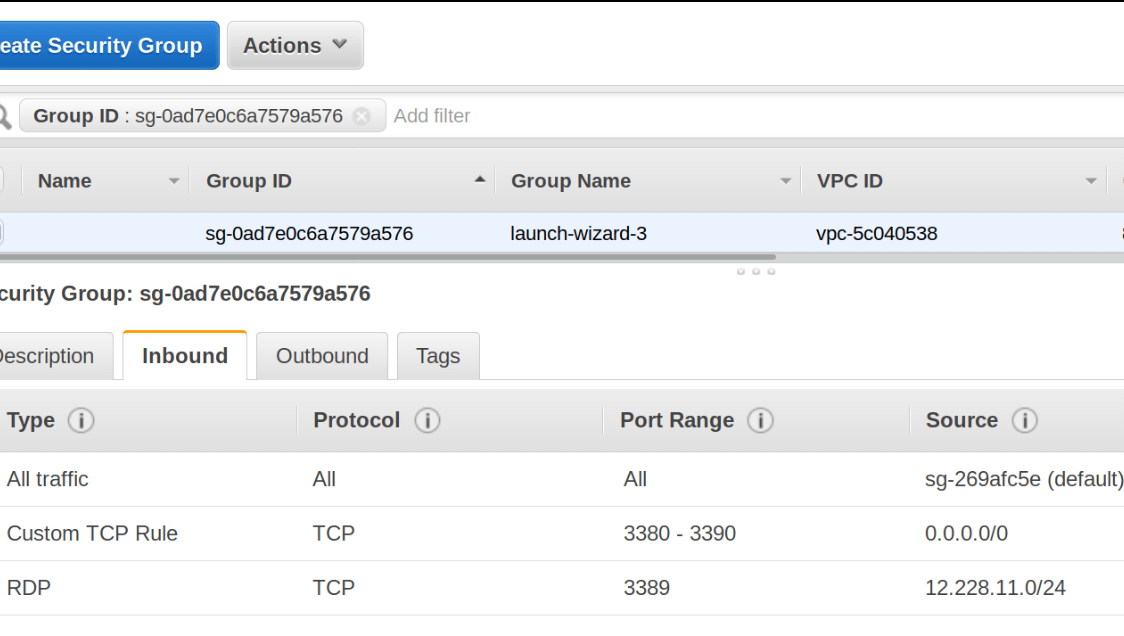 Q23. You have four front-end web servers behind a load balancer, which use NFS to access another EC2 instance that resizes and stores images for the front-end application. What security group policies should be assigned to these servers?

Q24. You have a Linux EC2 web server that suddenly is timing out on all HTTP requests and your SSH connection attempts are timing out. You notice that it is failing the system status check in the EC2 console. What action should you take?

Q25. You have several on-premise servers and would like to store your offsite backups on AWS. What fully managed backup service can you use to ship your backups to AWS?

Q26. What is the best practice for creating a highly available PostgreSQL database in RDS that can sustain the loss of a single AWS region?

Q27. You created a new Linux EC2 instance and installed PostgreSQL but you are not able to establish a connection to the server from your local computer. What steps do you take to resolve this issue?

Q28. What does the statement body of this S3 bucket policy do?

Q29. A new developer has been added to the team and you have been asked to provide access to the organization’s AWS account. What is the best practice for granting access?

Q31. What’s the best practice for horizontally scaling a legacy ASP.NET web application that relies on Active Directory and is currently deployed to a single Windows EC2 instance?

Q32. What does this small section of a CloudFormation template do?

Q33. You are running Docker containers on ECS. What is the most important metric to monitor?

Q36. Can you lose the public IP address associated with your EC2 instance?

Q37. Where is the best place to store database backups on an EC2 instance that is configured as a database server?

Q38. Which of these is a valid restriction on the properties of a VPC?

Q39. You have a Linux EC2 instance that is not responding to requests and you can not connect to it via SSH. Using the EC2 console, you issued a command to stop the instance, but for the past 10 minutes the instance has been in the “stopping” state. What is the next step you should take?

Q40. You have 14 on-premise web servers, 4 database servers, 6 servers using GIS software, 3 file servers, and 4 development servers. What considerations should you take into account when migrating these servers into AWS?

Q41. As your web application grows and your application monitoring needs become more complex, which additional log monitoring service should you NOT consider?

Q42. You have a T2 EC2 instance that is critical to your infrastructure. How would you monitor the most important metric for this instance?

Q43. Which feature can be used to respond to a sudden increase in web traffic?

Q44. If a set of servers are located within a private subnet of your VPC, how can you connect those servers to on-premise servers?

Q45. You have a UDP load balancer that is created by an instance that is running an NGINX proxy. Your application performance management (APM) solution can detect failures in your load balancer instance and transfer the Elastic IP to a passive standby instance. Using the AWS CLI, which script do you program into your APM to move the Elastic IP?

Q46. What service can host your Docker containers?

Q47. In the S3 console, underneath the Access column, what does the public badge next to the bucket name indicate? 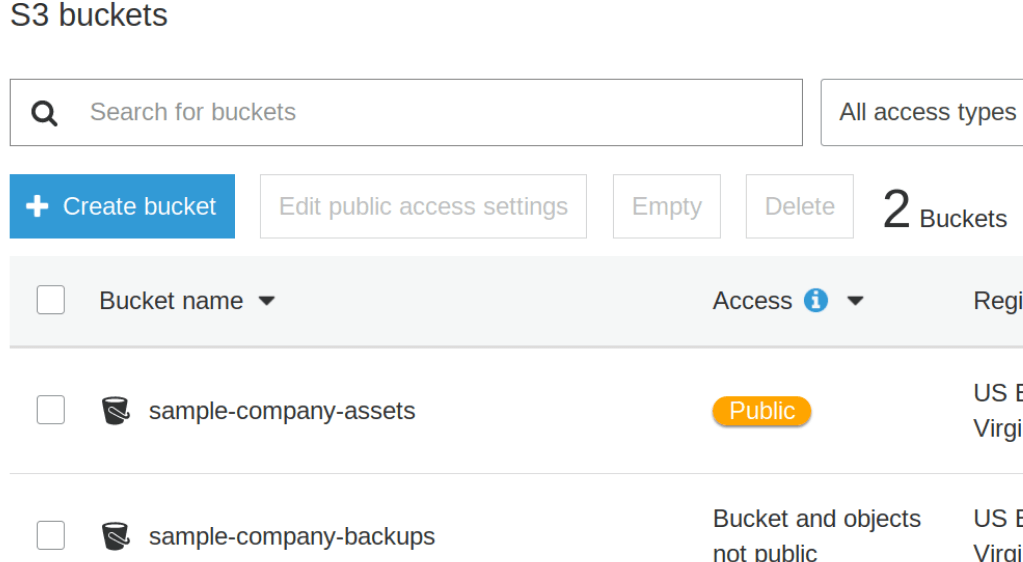 Q48. What privilege is specific to the AWS root account, and cannot be granted to another IAM user on the account?

Q49. Your application is sending 50,000 emails through SES each day. Since you must maintain a low bounce rate to avoid being put on probation, what simple system do you architect to automatically process hard bounces?

Q50. Your web application is getting a suspicious amount of bad requests from foreign IP addresses. Your business is operating in only a few countries and you would like to block any other traffic. What is the best practice for limiting access to your web application by country?

Q51. What is the best practice for maintaining Windows EC2 instances and applying updates?

Q52. In addition to CloudFormation, you can use other orchestration tools to automate server formation and maintenance. Which tool is not an efficient choice for the orchestration of a large infrastructure?

Q53. What happens to a SQL Server RDS instance if the databases increase in size and go over the allocated space?

Q54. You have a fleet of IoT devices that send telemetry to a server-side application provided by your IoT vendor for decoding a proprietary messaging format. The devices are provisioned to send telemetry reports to your server via UDP on port 6339. What is the best way scale this server as more Iot devices are added to your fleet?

Q55. the outbound rules of a security group only allow traffic going to 0.0.0.0/0 on TCP Port 22 (SSH) and TCP port 3306 (MySQL). Review the inbound rules listed in the image below. What is the most important issue to fix with this security group configuration, for an Ubuntu EC2 instance acting as a web server? 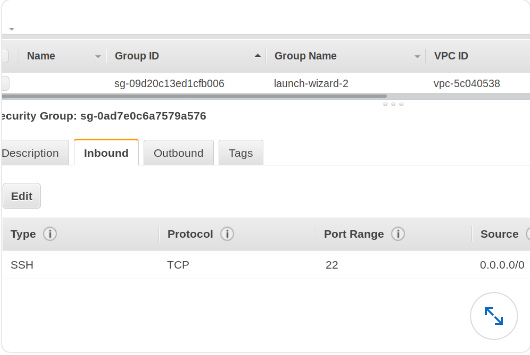 Q56. An EC2 instance running a WordPress site keeps getting hacked, even though you have restored the server several times and have patched WordPress. What AWS service can help you detect and prevent further attacks?

Q57. A nontechnical client wants to migrate a WordPress site to AWS from a private server managed by a third-party hosting company. Which AWS service should you recommend to migrate the site to?

Q58. Your company has on-premise servers with an existing onsite backup solution that also replicates backups to another campus on the other side of the country with its own on-site backup solution. You have been asked to create a third level of redundancy by also storing these backups in the cloud. In the event of a primary and secondary backup failure, your boss wants to know that the cloud backups can be accessible as fast as possible to reduce downtime during the recovery. What S3 storage class do you recommend for cost and performance?

Q59. Which big data store will let you store large streams of user activity data coming from both web and mobile applications?

Q60. What option is best for Auto Scaling your EC2 instances for predictable traffic patterns?

Q61. You are migrating an on-premise RabbitMQ cluster into AWS. Which migration path should you choose for ease of both maintenance and deployment?

Q62. When creating a new RDS instance, what does the Multi-AZ option do?

Q62. What is the best EC2 instance class for a server that continuously has a heavy CPU load?

Q63. Your application performance management (APM) system can read the status of your CloudWatch monitors and perform scripted actions. When the CloudWatch metric StatusCheckFailed enters a failed state (a value of 1), you would like your APM to automatically repair the instance. Which script do you use?

Q64 What is wrong with the third incoming security group rule, which allows all traffic from sg-269afc5e to go to an

Q65 You have a VPC that has a public and private subnet. There is a NAT gateway in the public subnet that allows instances in the private subnet to access the internet without having public exposure outside of the VPC. What should the routing tables be for the private subnet? 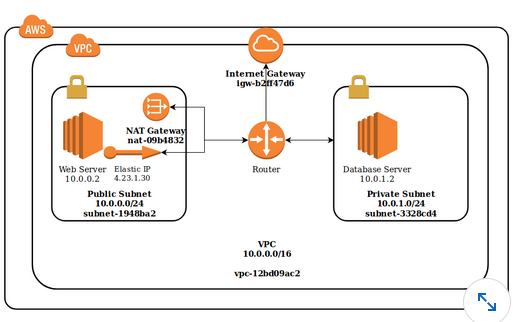 Q66 To comply with auditing requirements of some compliance standards, which AWS tool can be enabled to maintain an audit log of access and changes to your AWS infrastructure?

Q67 You have an application that generates long-running reports, stores them in an S3 bucket, and then emails the user who requested

the report with a link to download it. What is the best practice for storing the report data in S3?

Q68 When sending a large volume of email through SES, what is the most important set of metrics to monitor?

Q69 You are going to host an application that uses a MySQL database. Which database should you select if you don’t want to manage

Q70 A form in web application is sending sign-up data to “http://example.com/signup/new?source=web” and this data needs to be handled by an ECS service behind Application Load Balancer (ALB). Which ALB rule will route this request?